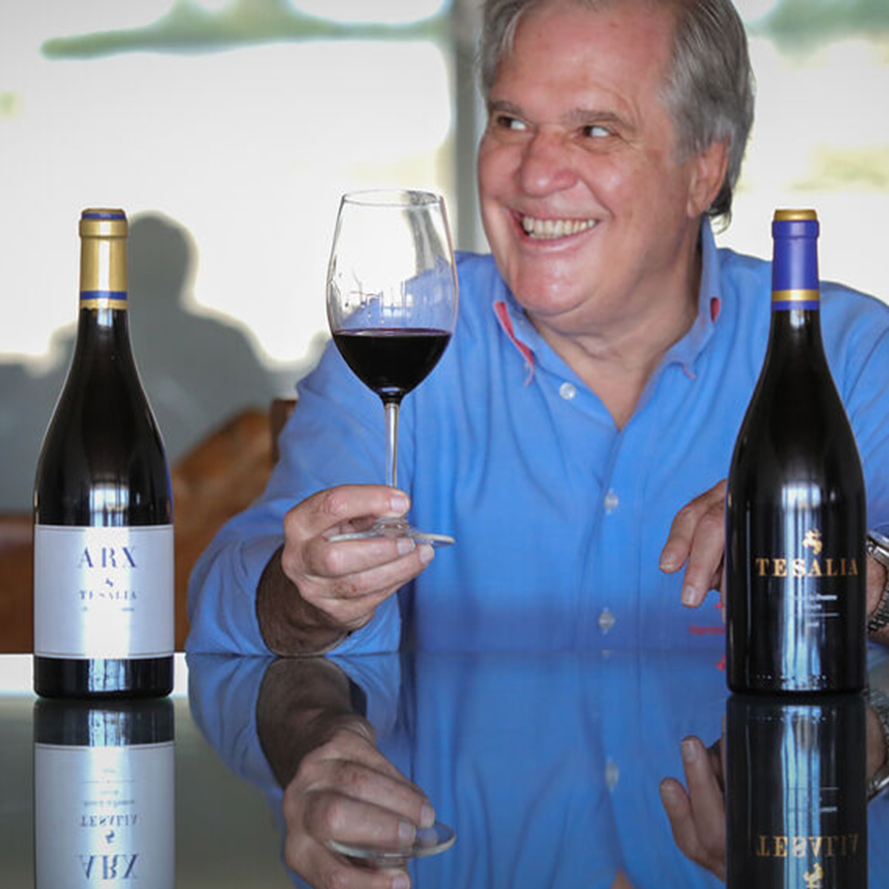 He came to Spain in the 70’s to teach the Spaniards to use Schweppe’s tonic in their gin drinks. Now Englishman Richard Golding will convince both the domestic market and international wine lovers that some of the best Spanish wines can be made in the far south of the country – near the white towns of Arcos de la Frontera and Grazalema, in the province of Cádiz.

One of the big surprises among the new, modern wines from Spain are two red masterpieces from Bodega Tesalia, a relatively newly established wine house on an old farm right in the heart of the Serranía de Cádiz, or even more specifically, in the Sierra de Grazalema.

We are almost on the border of sherry land, but here it is not white sandy albariza soil or the palomino grape that dominates. Instead, Golding and his hired experts go up with wines based on the grapes tintilla de rota, petit verdot, syrah and cabernet sauvignon.

Wanted to stand out

Richard Golding with his daughter Natalia who shares his father’s passion for horses – and wine! Photo: Bodega Tesalia

-If we are to be able to stand out in competition with everyone else who makes wine in Spain, close to 45,000 players in total, then we had to do it with our grape selection, says Richard Golding.

Tintilla de rota is a very local grape in Andalucia, possibly brought there as early as 1000 BC by the Phoenicians. It has been nicknamed “de rota” because it is on the southwest coast of Spain near the town of Rota, formerly known for i.a. a major U.S. naval base, that the grape originated and has had its home. Petit verdot is another not so widely used grape that many producers have found thrives in southern Spain. Syrah and cabernet sauvignon, you can get good grapes from almost anywhere.

Now the first two wines from Bodega Tesalia, Arx and Tesalia, have also been launched in Norway. On the labels, they are marketed under the motto “La joya del sur” (= Jewel of the South). The name Arx is taken from Arx-Arcis, an older name for the historic Arcos de la Frontera, an important border town in the fight against e.g. the Moors. Arcos de la Frontera also has a very charming parador, for those who want accommodation near Tesalia.

When the two Tesalia wines arrived in their first vintage, it did not take long before the wine critics came on the scene with high scores. An immediate success can be said, when former Parker reviewer Antonio Galloni (Vinous) knocks in with 92 points and Guia Penin with 91 points for Tesalia, and the same – in addition to Parker’s Wine Advocate – coughs up 90 points to Arx.

The main house on Golding’s farm. No wonder his wife made every effort to establish herself in Andalucia, in the province of Cádiz. Photo: Tesalia

Richard Golding had great success as marketing director in Schweppes, and eventually settled in Spain. He has been involved in several major multinational companies at management level, and most recently before retiring he was president of the food chain Día and sat on the management team at Vitaldent. In addition to wine, he is very interested in horses, not only because his daughter Natalia does show jumping. Golding is actually also a passionate horse breeder.

It was his wife who thought that he should use the money he had earned in business on a farm where they could enjoy retirement, but also have something to do, e.g. horses and wine. She had already seen the area around Arcos de la Frontera, and so it was! In 2007, a larger property “out on the prairie” was purchased.

The Tesalia estate was already a stately farm, with a castle-like main house on top of a hill. The property was a total of 106 hectares. Not very suitable for ordinary agriculture, but with clay and limestone which made it a perfect soil for vines that should have a demanding environment. Also, more than enough space to have horses. Ten years ago, in 2010, Golding started planting vineyards. He had then carried out a proper research, and obtained expert help in all areas of wine. Before building the production plant, he went around to a number of top wineries. The question he often asked there was: “If you were to do something different when you built here, what would it be?” In this way he avoided making the same mistakes that others might have made.

It is said that Richard Golding and his family take care of their vineyards as a passionate gardener takes care of his own garden. And if you come to visit, it is the old white mansion at the top of the hill you notice, not the vineyard, because it is very nicely integrated into the landscape, partly dug into the hill and most of the areas underground.

What really counts starts with a dream. Then you have to have patience, be professional and have a will to stand, says Richard Golding himself about his horse and wine project. Others say that the Englishman, who is described as a lovable person with a lot of humor, also has itching in his ass, he is always on the go. Then it also helps that he has been told that everything he does is gold. Dutch Cees van Casteren, Master of Wine and author of ten books on wine and winemaking, has been a consultant for Golding in the construction of Bodega Tesalia, while Ignacio de Miguel is chief sonologist. The plant has a capacity of 100,000 bottles, but as of today it is made around half. 36,600 bottles of Arx 2017 and 13,800 bottles of Tesalia 2016 which are now available for purchase in Norway. Only just under 15 hectares are planted with vines, while 30 hectares are set aside for horse breeding.

Harvest the grape at night

It is often hot in Andalucia. Therefore, the harvest takes place at night, when the temperature is at its lowest, and with a headlamp. Photo: Tesalia

The vineyards are north-facing, have controlled irrigation and are divided into ten blocks, all of which are harvested and vinified separately. In the warm and sunny climate (average temperature in a year is 17.3 degrees), one chooses to do all the harvest by hand and at night, with headlights. The grapes are brought straight to the cold room where they are allowed to cool down for a day and a half before pressing, which is done slowly and carefully. Then a gentle pre-fermentation for up to four days to preserve aroma, taste and color, before the usual application temperature controls for 20-25 days.

The wines are stored for 12 months from 300-liter French oak barrels. The result is hefty, but wines that can take aim to prove that good drinking experiences can certainly come with wines made in southern Spain.

The winery itself at Bodega Tesalia is partly underground, so it blends well into the Andalusian landscape. Photo: Tesalia

These are the two wines that have also been launched in Norway: